We are developing the RevPiPyPlc system as well as RevPiModIO!

It offers the following functions

It consists of two components

With this program, which was also written in Python, all tasks can be performed over the network with the RevPiPyLoad. The program uses the tkinter for windowing and therefore runs on Linux, Windows and Mac, if Python is installed.

This program allows you to create your own RevPi systems in a list to allow quick Access.

A very cool feature is the “watch” mode! 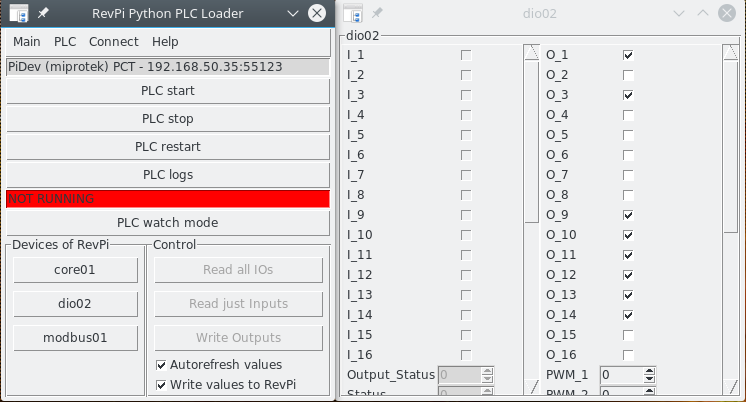 The current values of the IOs in the process image can be viewed in the user interface. The system also writes outputs to the process image on demand, for the IO check – very useful for the first start with the Revolution Pi without further software installation and programming: D

Besides the possibility to view the log files and to control the Python program, we can also import and export the piCtory configuration. 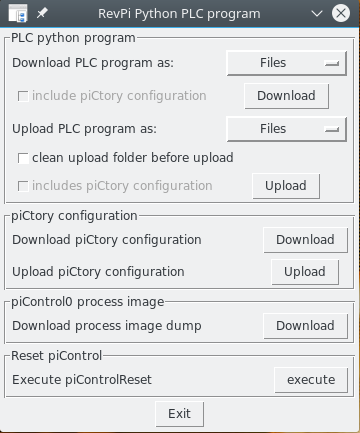 You can find everything else in our documentation!

This program is running as a service on the RevPi in the background. It starts the transferred Python program for the control and monitors it. Outputs of the program are being written to a logfile.

It offers various settings in the /etc/revpipyload/revpipyload.conf file.

In addition, an XML-RPC server can be activated, with which the following possibilities are made available via the local network (NOT INTERNET):

These tasks can be carried out via a graphical user interface from another PC.

You can find everything else in our documentation!